The Alpha was the first top from Billetspin in 2016, a year which would see the company expand hugely. Rich from Billetspin gave a full view of the manufacturing procedure for the top. This includes the design, and the machining setup for the mill. 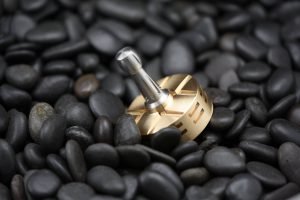 The design is a basic one by more modern Billetspin standards, however was relatively complex at the time. It is a two piece top, both the base and the stem were made from Copper, Stainless Steel, or Bronze. Buyers were able to choose any combination of the two, as orders were taken in a Facebook post, running until the 24th January 2016.

The top has a geometric cross design, with corresponding dashes on the side of the base. The base also has a somewhat unique taper that leads into the stem. Though this looks like it is for support, it is just a design feature.

The bottom of this spinning top is relatively plain, and is just a smooth curve to the ball bearing. The ball bearing was a ceramic ball bearing, but on the special Damascus edition was a ruby bearing.

After the sales of the Alpha did so well, at the time being the best-selling Billetspin top, Rich decided to release the Alpha Stemless. There were 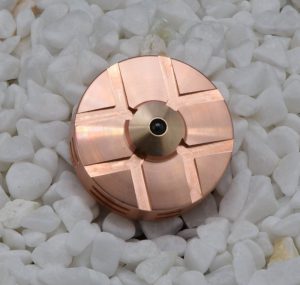 the same materials available, except with this version the central hole in the base terminated in another bearing, thus creating a double sided stemless top. This top can be spun without a stem due to the ridges on the side giving grip.

All standard combinations seen in the chart were also available as stemless versions.

There was only one special top design for the Alpha and that was a Damascus version. There were five of these made, and were released in a competition format, most of which involved selfies! This spinning top was a Damascus base, with a copper stem, and a ruby ball bearing.

The Christmas spinning top from Billetspin was a present from the whole team, back to the community. No Christmas tops were available for sale, instead all of them were given away in a big Facebook […]

The Paradox spinning top from Billetspin was born of the long spinner contest at the Blade show 2016. At the show there was a long spinner competition for makers. Rich made a top which ended […]