The triskelion is the 37th overall top from Billetspin and was first released on the 6th of January 2017. This top is being released throughout 2017 as Rich from Billetspin plays with different material combinations between other endeavours.

It is not currently known if or when the next Triskelion release will be. 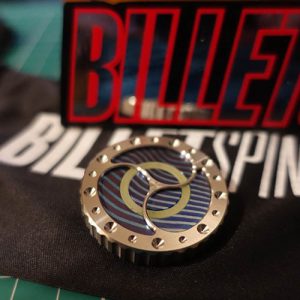 In reverse chronological order, here are all of the Triskelions released to date.
Materials are listed outer collar/ inner disk/ inner ring.

In a Facebook post Rich announced that they were in the process of making 4 more combinations for 2017. In that same thread there was a picture with four different materials listed. Now this is just speculation at this point, but given the first on that list is the first in the new wave to be released, it is a reasonable assumption that this list is the next four material options (for the inner disk). They are:

Again, this is just speculation at this point, but they all sound great! Hopefully there will still be more after these four.