The Infected Specimen is the first spinning top collaboration between Billetspin and Jim Skelton. Jim was the person who came up with the idea, and then it was down to Rich Stadler to make it viable. Obviously the main design was the biohazard symbol, but this was taken into consideration in material choices as well as raw design. 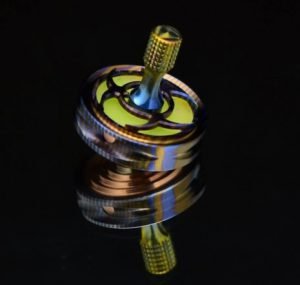 It’s easy to see where the inspiration for this spinning top came from. Anyone that has ever seen a biohazard warning will know the design. This is probably the most literal name to design combination we have seen from Billetspin, and that is coming hot off the heels of the very literal “Rotor”. 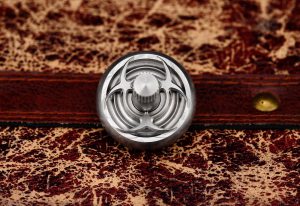 There were only a couple of changes from the early prototypes to the later design, with the main focus staying the same. Most of the changed came to the collar, changing from a rounded edge to a flat one with recesses.

The recesses that ended up on the final design have a lot more to them than meets the eye. Firstly they align with the curves of the biohazard design on the top, so there are three in total. They are also not just a linear cut through the circular design. Instead they have their own curves, and if you could see through would look like an M. they also reveal a side view of the inner disk material.

The underside of this spinning top is also fairly unique. The grooves on the base are made using a new tool, which means they can be machined much deeper, and clearer. This added a lot of versatility for the underside of tops both on the Infected and for suture Billetspin designs.

In keeping with the radioactive theme, the infected specimen also contained a material called Moonglow. This is a very efficient glow in the dark plastic which can also be machined. With this installed in some of the tops, a seemingly radioactive glow could silhouette the infected design for a very unique look!

Timascus and Tungsten (both copper and regular) were a common theme in the Infected combining for half of the total exotic combinations. Tungsten is a popular choice because of the increased weight. However, it was moonglow that stole the show, as its glowing properties really lend themselves to the radioactive/biohazard theme.

The remaining exotics were released on the Billetspin Facebook group. Three were auctioned, these were either one offs, or 1 of 2:

The others, including ten Timascus/W/flamed SS were released via sign up sale, and one was done via a scavenger hunt!

There was only one top that didn’t get a release and that was Timascus/2cm/flamed Titanium. It’s unclear where this one ended up, but it was shown on the Billetspin page.

The Rotor spinning top from Billetspin was a much more casual and relaxed design, and release. For context, the rotor was released just after the extremely popular Navigator. However, that release was not without its trials […]

The lotus was the first one-piece top from Billetspin in 2016. It was released in large numbers directly on the website. This marked a move away from Facebook sales posts by Rich in the past. […]