The K2 is the younger brother of the Billetspin Kraken spinning top. They are inextricably linked, however they both have very different upbringings and motivations. The K2 is not the Kraken 2, but is a nod to the design that came before it. The K2 would go on to become by far the biggest selling spinning top of 2016, surpassing the Navigator.
Price: $155 – $400 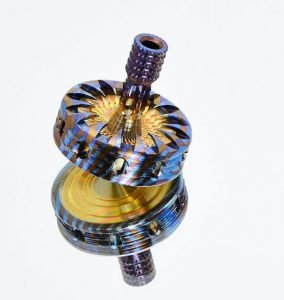 The original kraken was a design that was not supposed to look like the mouth of a kraken. But, it did and so was named accordingly. 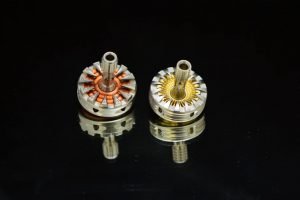 However, the K2 was designed with the specific goal of looking like the mouth of a kraken eating the stem. The outer spikes are the teeth, then the inner disk is the mouth and throat, with the holes on the collar being the eyes.

The early prototypes of the K2 were very similar to the end product. So, it’s clear that Rich had a very clear design in mind when he started prototyping. The stem was the first part of the top to be made, and brings with it the hidden gem in this spinning top. Whilst the top is spinning, the hollow stem can be seen right through when looked at from the side. This is a totally new concept for Billetspin, and pretty new for the top community. Most other top makers use lathes to make their tops. A stem like this would not be possible on a lathe which makes it incredibly unique.

There was some concern over the spikes of the K2, as in previous designs like the Sharknado, the fins were a bit brittle. However Rich was aware of this potential issue in the design stage and made sure they were sufficiently sturdy.

The K2 is another top design where the number of exotic combinations outweigh the standard. The original plan was for just the inside to be exotic, just like on the Trident. However, when making the tops for the pictures it became clear that a lot of the materials’ unique looks were concealed by the jagged design. This meant that the exotics would need to be moved to the outside as well.

This opened the door for a lot more combinations, and though it set the whole project back, it also created some of the best combinations. Perhaps this setback was actually the catalyst needed to make it such a success.

Originally the K2 was to be released before the Infinity. However the mix up with the exotic materials needing to go on the outside led to a much longer wait for materials. So in the meantime, Rich designed and released the Infinity.

There were 40 tops released on the Indiegogo project. This consisted of 15 standard and 25 regular combinations. They were all released at the same time when the project was live. The difference with an Indiegogo campaign is that we were able to see how many of each combination were made and available. The exotics ranged from just 25 – 300 units. Though the standard combinations were unlimited, ironically the rarest of the regular release tops is the Br/SS/SS combination at just 10 units. The most popular by far being SS/Cu/SS at 249 units.

There were then 5 more exotic combinations made, 4 of which were released on the Facebook page. Three of which were made as a special giveaway for the project surpassing the $400,000 mark. These are:

The other were a 1 of 1 in Timascus/Mokuti/Ti (with a ruby bearing) which was given to a friend of Rich’s.
The last was a top originally made for Rich as a personal top for himself. However a second was made for a good cause auction. It was SS/Mokuti/Flamed SS, and was sold for $3,500.

The Infected Specimen is the first spinning top collaboration between Billetspin and Jim Skelton. Jim was the person who came up with the idea, and then it was down to Rich Stadler to make it […]

Billetspin is one of the leaders in the high performance spinning top market, and the K2 is their most popular top to date. Originally released in late 2016, the K2 became the highest selling top […]