The lotus was the first one-piece top from Billetspin in 2016. It was released in large numbers directly on the website. This marked a move away from Facebook sales posts by Rich in the past. It was also the smallest Billetspin top ever made at the time of release, coming in at under one inch. 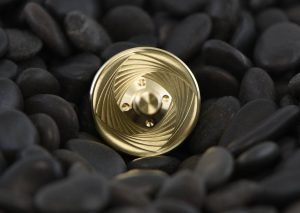 The core concept of the Lotus design is slightly offset rounded squares stacked on top of each other and decreasing in size. This can be seen in the manufacturing video, as the milling machine makes the smaller squares, the pattern becomes apparent.

The stem then comes out of its own rounded square, presumably left as the milling machine would not be able to reach the base of the stem to “complete” the pattern. Early iterations of the spinning top did not have the small indents at the base of the stem, but were added before release. They would then be filled with rubies for a pair of one-offs.

The lotus would also mark the move to a bronze alloy as opposed to brass. Though this was not a permanent and exclusive move (brass is still used), it was the first top to use the new bronze. A material which would then go on to be used extensively.

Similar to its predecessor the “Alpha” the general release of the Billetspin Lotus was followed by a stemless version. This was the exact same top, except without the stem… as the name suggests. This would be the last time that we would see an intentionally stemless top until the triskelion in early 2017.

There were only two special versions of the lotus made. The first was a stainless steel version, but the top of the stem, and the base of the stem were mounted with rubies. This version was not for general release and was made especially for a friend of Rich’s.

The rubies were previously used as ball bearings in the bottom of the spinning top, but the move to ceramic saw them appear in other places. Places such as this lotus and the base of the special Damascus Alpha.

The second exclusive Lotus was another ruby mounted version, but this one was sold at auction on the Billetspin Facebook page. It sold for $750, it was also the first top to be made on the E52100 machine.

The Torus is a one piece spinning top from Billetspin. We have to look as far back as May 2016 for the last one piece top, the Paradox. Some customers were worried that the trend […]

The Paradox spinning top from Billetspin was born of the long spinner contest at the Blade show 2016. At the show there was a long spinner competition for makers. Rich made a top which ended […]