The Nexus spinning top from Billetspin is a pure bred long spinner. Looks were not taken into account with this design. It was made with the single goal of spinning for over 30 minutes on a single spin. 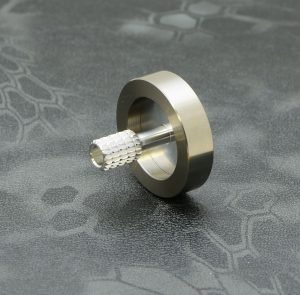 How To Buy a Billetspin spinning top

There was no consideration for aesthetics on this design. This one is all about the spin times. The goal was for the top to be able to reach over 30 minutes off one spin from a skilled spinner. In the end the tops was released at about the 25minute mark. Though, since its release there have been a small number of users who have been able to surpass 30 minutes by hand, and videoed their attempts.

The key to a long spinner is to have the majority of the weight of the top on the outside and close to the base. Therefore the centre of the top and the stem are made of aluminium, while the outside is made of tungsten. The base of the top is also perfectly flat with very little clearance to keep the weight low to the ground.

The issue with tungsten is that it is hard to find a billet of it which is perfectly balanced. This can lead to wobble. To remedy this, rich made a microscopic asymmetry to the top, and then aligned the stem and the collar to get a smooth spin. This proved to be a lot more work than first anticipated, and lead to some very sore fingers from testing.

The release of the Nexus was one of the biggest surprises in Billetspin drop history. There were 350 units put love on the website, and they all sold out within 90 seconds. This design was expected to do quite well, but few predicted that kind of release. There was no limit on the amount of them people could order, though Rich confirmed that no one bought more than 3 in one go.

This meant that a lot of people were left without, and so the prices on the secondary market saw a huge increase in the following months.

The K2 is the younger brother of the Billetspin Kraken spinning top. They are inextricably linked, however they both have very different upbringings and motivations. The K2 is not the Kraken 2, but is a […]

The Christmas spinning top from Billetspin was a present from the whole team, back to the community. No Christmas tops were available for sale, instead all of them were given away in a big Facebook […]

The Trident spinning top from Billetspin came hot off the heels of their previous launch of the Rotor. In fact, it was only two weeks after. They were released primarily on the website, in a […]