Custom Knife Factory (CKF) have just released two new spinner in quick succession. June has been a busy month for CKF, as they have attended the blade show in America as well as release two new spinners. Pre-orders for

both of the new spinners, the Pepyakka 4.0 and the Pepyakka S have been open for a while now, so it’s not a totally new idea. However, there were no pictures released for either when pre-orders opened in an attempt to stop clones being made.

The Pepyakka 2.0 was one of the most popular cloned designs on Amazon. This is because CKF make some incredibly good looking gear (not just spinners). So when that design was stolen, those that don’t know of CKF bought the spinner as it looks so unique. It was to stop this theft of intellectual property that CFK decided not to show pictures of either the S or the 4.0 when they first went live on their site.

People have still ordered plenty of the spinners however, and pre-orders for both sold out even without pictures. This is a testament to peoples appreciation of their work, and confidence in another great design. They were not disappointed. 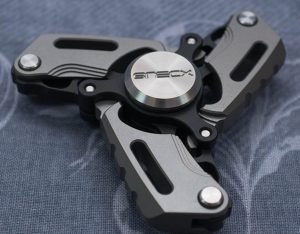 The Pepyakka S is a totally new take on the Pepyakka series. Away from the usual numbered versions, this spinner is a collaboration with SNECX. This spinner is unique in a number of different ways, most noticeably its resemblance to a knife.

Now, it should come as no real surprise that the Custom Knife Factory have made a spinner which resembles a knife. But in actual fact, none of their previous versions have looked anything like one. It’s clear to see where the inspiration has come from though.

The spinner has two bearings and is described on the website as a “mechanical puzzle. There are a couple of reasons that there would be two bearings. It is said on the site that it is to reduce the gyroscopic effect. This would work in that it will make two points of rotation in the Y axis as opposed to the one thin bearing in your common spinner. It may also be that there is a piece of metal running through the middle of the spinner, and so there would need to be one bearing above and one below. Either of these choices make it something completely new to the spinner market.

The design appears to show hinges, and some have speculated that this means it can change its shape. It looks from the pictures as though it could move and transform into more of a triangle shape as opposed to a three armed shape. If true, this would make the Pepyakka S totally unique and completely worth the whopping price tag.

Though this is self-proclaimed a “Grail Spinner”, grails are usually casual releases that end up being incredibly rare, and become extremely expensive on the secondary market. The S cuts out the middle mad and comes in extremely expensive at the start. It costs $425. However this has not stopped the pre-orders from being snapped up and selling out.

$425 is a huge amount of money to spend on a spinner, however, with 20 different pieces, a totally unique design, and clear high quality at least you can see why it costs so much. This has been a merit of the past Pepyakka spinners, that although they are costly, it is clear to see from the amount of parts why it costs so much.

In short the Pepyakka is a three armed version of the Pepyakka 3.0. The 3.0 was an incredibly popular design and they sold nearly 3,000 of them at the $225 mark. However a lot of people aren’t too keen on the bar style spinner, so a tri was the natural progression. There have however been some people that have taken issue with the design being literally the same but with three arms.

The last three spinners in the Pepyakka line have all looked dramatically different with the only continuity being the screws. So, it is easy to see why some people might be a little disappointed, especially as CKF don’t allow refunds. It does mean some will likely pop up on the secondary market pretty early on. Perhaps this one should have been called the 3.5 due to its similarities to the 3.0 instead of the 4.0.

One thing that has changed is the anodization on the metal weights. This will vary in colour, so far we know they come in blue, bronze, and black. However, in true CKF fashion they are not letting you choose the colour, or even telling you which one you have. So you’ll have to play that lottery and see which you get in the mail when it arrives. The tritium vials are also random colours.

A definite step in the right direction is that now all of the bearings will be R188. This comes after the range of quality and multitude of issues experienced with their previous 608 bearings. However, as they are using the same production methods there may well be the same wobble problems. Though these will be less profound as it is a tri spinner not a bar spinner. You can read more about the some of the issues with the Pepyakka 3.0 here.

However, with all of the different points against it, the Pepyakka design remains one of , if not the best looking in the spinner market right now. This three armed instalment is still absolutely beautiful, and will definitely be popular. However, there is still a bad taste from the 3.0 in the mouths of a lot of buyers, so we will have to see how this one plays out. It is however only $10 more than the 3.0 which is a definite bonus. You can buy the 4.0 from the Custom Knife Factory Website.

These two spinners both being released in the same month (or at least the pictures of them) has meant that it has been a very expensive month for some people. There is also another spinner available but without pictures, the Pepyakka Z which will be released later this year.