Arkady over at Scullspinner has released a new picture for his latest project which seems to be a Star Wars themed fidget spinner. His designs have really captured peoples interest with their unique and vibrant shapes and colours, and his latest instalment seems to offer the same level of intruige. 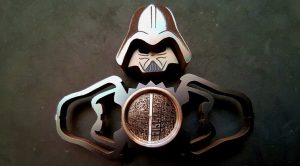 So far we have a decent amount of information on the Star Wars fidget spinner, and even some prototypes to work with when looking forward to the new model. It seems as though Arkady will be working on his tried and tested design of two faces either side of the middle button, and staying away from the temptation of adding another limb to his spinners. The button has undergone some changes however, to put more emphasis on the outer rim of the button, and give the overall look a more spherical shape, which coincides nicely with the Death Star design

The first prototypes to be posted on his group show a Darth Vader face being the main focal point with the Death Star button in the middle, but after interest expressed in the comments in his post it seems as though Arkady is working on a Bobba Fett version as well, whether this is instead of Darth Vader or as well as remains to be seen. Although we will need to keep an eye on the ideas of a Star Wars fidget spinner, as Lucas Film (and now Disney) have been notoriously vigilant and ruthless in the protection of their intellectual property.

Arkady and Scullspinner don’t have a store so if you are interested in one of his products you will need to like his Facebook group with the name “Scullspinner” and message Arkady Lukashenko directly to place an order. The hand spinners start at $120 and increase with a large amount of add-ons available.

The original Scullspinner is one of the most unique designs in the spinner world, and we have a full hands on review here