The Trident spinning top from Billetspin came hot off the heels of their previous launch of the Rotor. In fact, it was only two weeks after. They were released primarily on the website, in a couple of waves, as well as some being offered on Facebook. It was by far the biggest range of combinations offered to date with 32 being made in all. 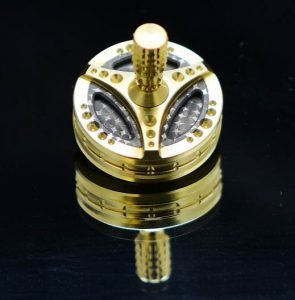 This is an easy top to launch due to its low centre of gravity. Though this is similar the Navigator, it is a stark contrast to its direct predecessor, the rotor. The reason for being called the Trident is obvious. However, what the three stem design does is make the effect when spinning different to any tops that have come before. When spinning it seems to be spinning a lot slower, as the main focus of the top are so spread out compared to other designs.

There were 9 different standard material combinations made, but only one three metal combination and that was SS/Cu/Br. Other than that all of the tops had a matching material stem and outer ring.

Of the exotic combinations offered the only outer shell to inner material not to be offered was Br/2cm, it is not clear why this was.

Later there would be a one-off all bronze Trident that was given away on the Facebook page. The winner was chosen via a 4 stage “scavenger hunt”. They received it with a certificate of authenticity.

The last release of the Trident was a wave of bead blasted bronze over bluetongue Damasteel. The bead blasting gives the bronze a matte effect which makes it different from any of the other standard metals which come untreated.

27 of the 32 Tridents were released on the Billetspin website. However they came in different waves. There was the initial release with all of the standard materials, and some of the exotic. Then came some more exotics as more of the Damascus came into stock. After the Damascus was the un-etched Damasteel.

Away from the website, the tri-metal version of SS/Cu/Br was sold on a Facebook thread. The all Bronze was given away in a scavenger hunt, and the all copper was also given away on the Facebook page.

The blasted Bronze / bluetongue Damasteel were released on the Billetspin website, on Etsy and then in February of 2017 on Facebook

The Rotor spinning top from Billetspin was a much more casual and relaxed design, and release. For context, the rotor was released just after the extremely popular Navigator. However, that release was not without its trials […]

The Navigator was a big step for Billetspin in a number of different ways. Firstly it was the best-selling top to date, eclipsing the Alpha which was the previous holder. It was also a single […]

The Alpha was the first top from Billetspin in 2016, a year which would see the company expand hugely. Rich from Billetspin gave a full view of the manufacturing procedure for the top. This includes […]