The Torus is a one piece spinning top from Billetspin. We have to look as far back as May 2016 for the last one piece top, the Paradox. Some customers were worried that the trend of Billetspin was headed toward the outlandish and expensive tops. This would price a lot of people out of the market. However, the torus brought everything back to earth. 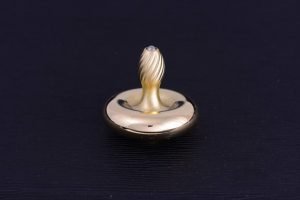 A torus is the shape that you get if you turn a cylinder around on itself, to form a circle. Given that, it is easy to see where the Torus spinning top got its name. Though originally Rich wanted to call it the “Fat Boy”, he stuck with the name Torus, for the geometric properties! 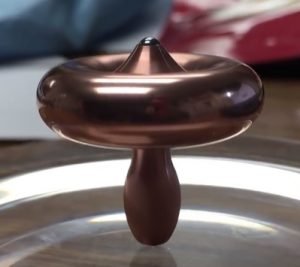 This spinning top is probably the most basic design of 2016 by Billetspin. Even the previous one piece tops, the Lotus, and Paradox had a bit more design aspect to them. The Paradox was designed to be a long spinner, and the lotus had an intricate pattern on the top. However, in simplicity is beauty.

The torus looks nearly exactly the same when spinning as when stationary due to the homogenous design. The only difference being the pattern on the grip disappearing into a blur when spun.

This top is however similar to its one piece predecessor the Paradox, as it too is able to be spun upside down. There are two identical bearings, both in the bottom and the top of the stem. This means that the top can be spun upside down, however the lack of a stem, and the heightened centre of gravity make this a difficult feat.

The Torus also saw a return to just the main three metal option of copper, bronze, and stainless steel. Flamed versions were offered for the SS and the Cu tops though. For copper this gave the top a much redder appearance, whereas stainless steel turns a dark blue.

There was only one exclusive made for the torus, which was also an exotic material. This was a one off prototype made of Timascus with a ruby ball bearing on the top. This was sold as a blind auction, with the only identifying factor being that it was a prototype for the new one piece top. It sold for $777

All of the main combinations were released on the Billetspin website in one drop. There were unlimited quantities made of all of the standard combinations. Then 50 of each of the flamed varieties were made.

The Infected Specimen is the first spinning top collaboration between Billetspin and Jim Skelton. Jim was the person who came up with the idea, and then it was down to Rich Stadler to make it […]

The Wraith is a completely new kind of spinning top from Billetspin. It was a complete one off made for a friend of Rich’s. The Wraith is comprised of 27 different parts, not including the ball bearing. […]